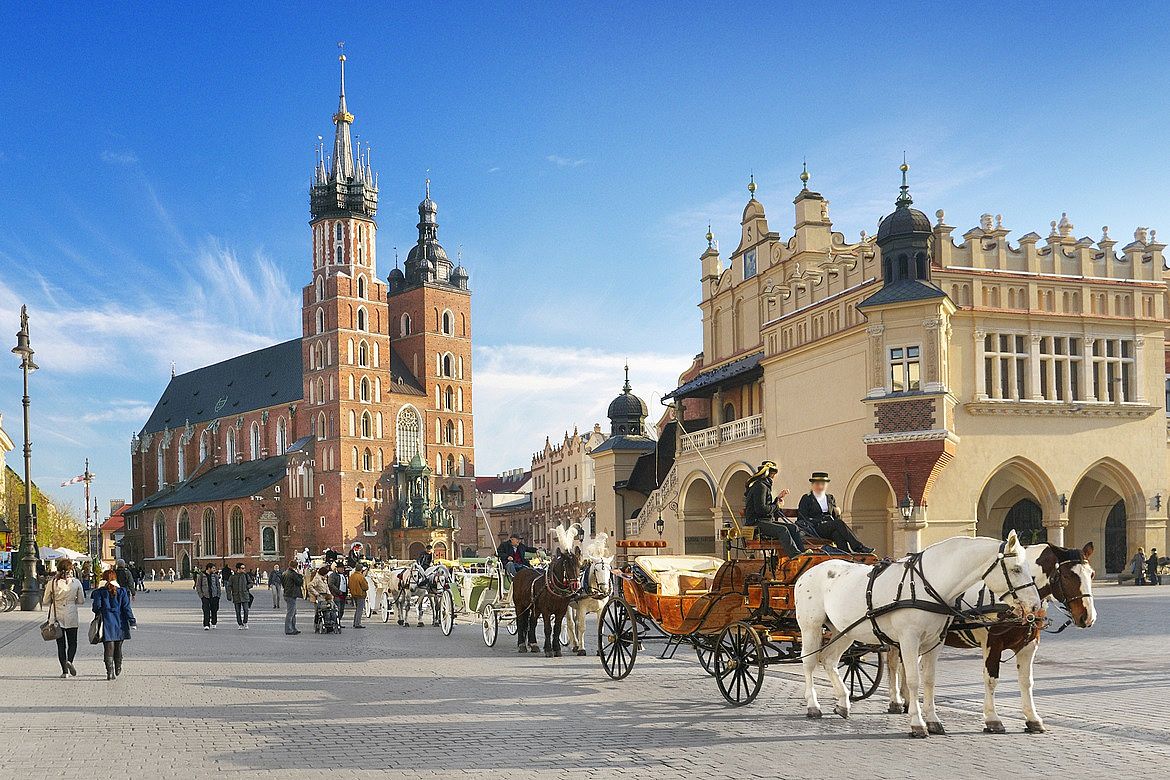 What monuments are worth visiting with children in Krakow?

If you are wondering how to take advantage of the first warm days and have a good time with your family, we have the answer. Spring is the perfect time for a trip to Krakow with your children! The City of Polish Kings offers a whole range of attractions that will be perfect for the youngest. From historical monuments, parks, forests, squares, to historical curiosities that are worth exploring during a trip to the south of Poland. We present the first of two parts presenting a proposal of places worth visiting when visiting Krakow with children.

If you plan to visit Krakow with your children, the following must not be missing from your list of monuments to visit:

The first point on the Krakow map of monuments must be the Wawel Duke's Castle. Wawel is situated on a limestone hill on the left bank of the Vistula. We associate its centuries-old history with the reign of Mieszko I and his successors, Bolesław the Brave and Mieszko II. As the seat of Polish kings, it was of great political and Christian importance, as evidenced by the extensive sacral architecture, the construction of which was continued by Kazimierz the Restorer, Bolesław Śmiały and Bolesław the Wrymouth. For centuries, Wawel played an important role in the state. However, along with the transfer of the royal court to Warsaw, it gradually lost its importance. Until now, being the main seat of Polish kings, it became (only and so far) the place of their coronation and burial of Polish kings. Certainly, the historical fate of Wawel will be difficult for the youngest to remember, but it is worthwhile for little tourists to get to know this unique place and its importance. In the Wawel museum collections made available to visitors, you can admire, among others: royal chambers, private apartments, the Armory and the Crown Treasury.

While in Wawel, it is worth visiting one of the largest churches in Poland - the Cathedral Basilica of St. Stanislaus and St. Wenceslas (known as the Wawel Cathedral) and tell the story of the famous Sigismund Bell, whose sounds resound on the occasion of important events for the country. The kids will be happy to touch his heart. According to superstitions, this gesture brings good luck. On the other hand, if a bell's heart breaks, it means bad luck. It is worth mentioning that the heart of the Sigismund Bell has already broken several times. The hitherto ailments meant that the currently famous Zygmunt beats only on the occasion of the most important events.

The boundaries of the Krakow Market Square were marked out in the mid-thirteenth century. Today it is safe to say that Krakow's Main Market Square is the real center of the city's life. An inseparable part of the Krakow market are the famous horse-drawn carriages, Krakow florists, shopkeepers set up, selling obwarzanki in characteristic trolleys, whose history and significance for Krakow can be explored by kids at the Obwarzanek museum. Feeding pigeons with grain is a great attraction for children and not only. The proximity and observation of these birds, their cooing and mating dances are one of the unforgettable moments of your stay in Krakow. . The rustling of wings and a wide range of sounds made by these characteristic birds have been hovering over the pearl in the crown of Krakow, the Main Market Square, for years.

The Sukiennice Cloth Hall and the underground Historical Museum of the City of Krakow.

The Cloth Hall is the hallmark of the Krakow Market Square. It is an oblong structure, built for social and commercial purposes, topped with a very characteristic roof, known as the Polish attic. In the past, mainly materials were traded in the cloth hall in Kraków, with time other goods also appeared. The originally built cloth stalls did not survive. However, the building was rebuilt. Today, the Cloth Hall is a place where you can buy various souvenirs from your stay in Małopolska, as well as jewelry, glass, amber and wood products.

The building of the Cloth Hall is divided into three storeys. There is a commercial area on the ground floor, and the Gallery of Polish Painting on the first floor. Underground, however, a branch of the Historical Museum of the City of Krakow was established, to which you must take your children.

Being in the center of Krakow, be sure to show your children this amazing object! The Barbican used to be an element of the city's fortifications in Krakow. Today it houses a branch of the Historical Museum of the City of Krakow. When planning a trip, it is worth checking the calendar to watch a show of court dances or fighting knights during the tour.

When visiting historical places in Krakow, do not forget to tell your children a few words about them. The trip will not only be interesting and exciting, but also educational. Historical curiosities about Krakow include the story of the Wawel Dragon and the brave Krakow Hejnalist, or the story of the sword hung on the cloth hall.

If your children are not afraid of fairy tales about dragons, they will surely like this story about the Wawel Dragon. If the legends are to be believed, the basement of the mountain on which the Royal Castle was built was once inhabited by a fire-breathing dragon. A mythical creature - an oppressor of the inhabitants of Krakow, who met a worthy opponent - Szewczyk Dratewka. One day, the fearless Szewczyk, the hero of the urban legend, treated the dragon to a ram stuffed with sulfur. Without knowing anything, he ate a tasty morsel and went to the Vistula River to quench his thirst. The thirst continued, so he drank the water until it burst. Today, only a memory and a souvenir in the form of a fire-breathing sculpture remain, under which the children will surely want to take a photo of themselves.

A legend about a knife hanging in the cloth hall.

The legend, thanks to which a knife still hangs in the Sukiennice, tells about two brothers who built the towers of St. Mary's Church. The younger of them realized that his tower would not be as high as his older brother's, so out of jealousy he killed him with that knife. However, overwhelmed by remorse, he took his own life by jumping from a higher tower. The knife was hung in memory of the tragic event as a warning against a fratricidal fight. The legend also explains why the towers of St Mary's Church are so different in height [1].

Krakow is a city full of secrets, each with its own history. This is also the case with the bugle call, which has been played every day for years from the tower overlooking the Krakow Market Square.

There is an unusual clock in the Market Square in Krakow. Children will not see him, but they will certainly hear him during their visit to Krakow. Time is measured here by the bugle call played on the trumpet from the tower of the Church of St. Of the Assumption of the Blessed Virgin Mary in Krakow. The characteristic melody that flows around Krakow's Market Square cuts off at some point. And so every day. Every hour. To the four corners of the world. Why is this happening? When visiting Krakow's Main Market Square, you can tell your children a story full of glory and heroism. It tells about the fact that long ago, in 1241, hordes of Tatar troops invaded Krakow. A certain trumpeter, who admired the views from the St. Mary's tower and looked for a possible fire that could threaten the city, noticed the advancing Tatars. Without thinking for long, he took a breath in his lungs and with all his strength, as loud as he could, played the trumpet, thus informing the unaware townspeople of the danger. Suddenly, the melody stopped. The brave trumpeter's neck was pierced by a Tatar arrow. Fortunately, his heroic deed was not in vain. The city was spared, and the enemies drove away with nothing.

Since then, Krakow has changed, grown and beautified. However, one thing remained - the bugle call and the memory of the hero who sacrificed his life to save the inhabitants of the Krakow city.

All the most important historical places that we have described are situated a dozen or so minutes walk from the Belle Epoque Residence, where your stay will not only facilitate movement around the car-free part of Krakow, but will also be an extraordinary complement to the historical adventures that you will provide for children during your stay in the City of Kings Polish.

The design of the Aparthotel Belle Epoque Residence is inspired by the belle epoque. They are inspired by the building itself, which is a restored, historic tenement house from the 19th and 20th centuries. The building could not lack the elements characteristic of its time, such as wooden floors, elegant stucco or antique furniture. Some of the Belle Epoque Residence apartments have windows overlooking the streets from which there is a view of the historic part of the city.

You can find more about our apartments.

We hope that you liked the first part of our series and introduced the possibilities of spending time in Krakow. In the next part of the series, we will tell you about mounds, parks and squares that are worth visiting when visiting the capital of Małopolska with children.


X
In order to provide services at the highest level, the Website uses cookies saved in browser memory. Detailed information on the purpose of their use can be found in
the Privacy Policy . By clicking I ACCEPT , you consent to the use of technologies such as cookies and processing by ApartArt sp.z o.o. limited, ul. Urzędnicza 16/2 30-051, Kraków, your personal data collected on the Internet, such as IP addresses and cookie identifiers, for marketing purposes (including the automated matching of advertisements to your interests and measuring their effectiveness). By clicking I DO NOT ACCEPT , you do not accept.
I ACCEPT I DO NOT ACCEPT